A Global Financial System with Hoskinson: “We Are Only as Good as the Tools We Have” 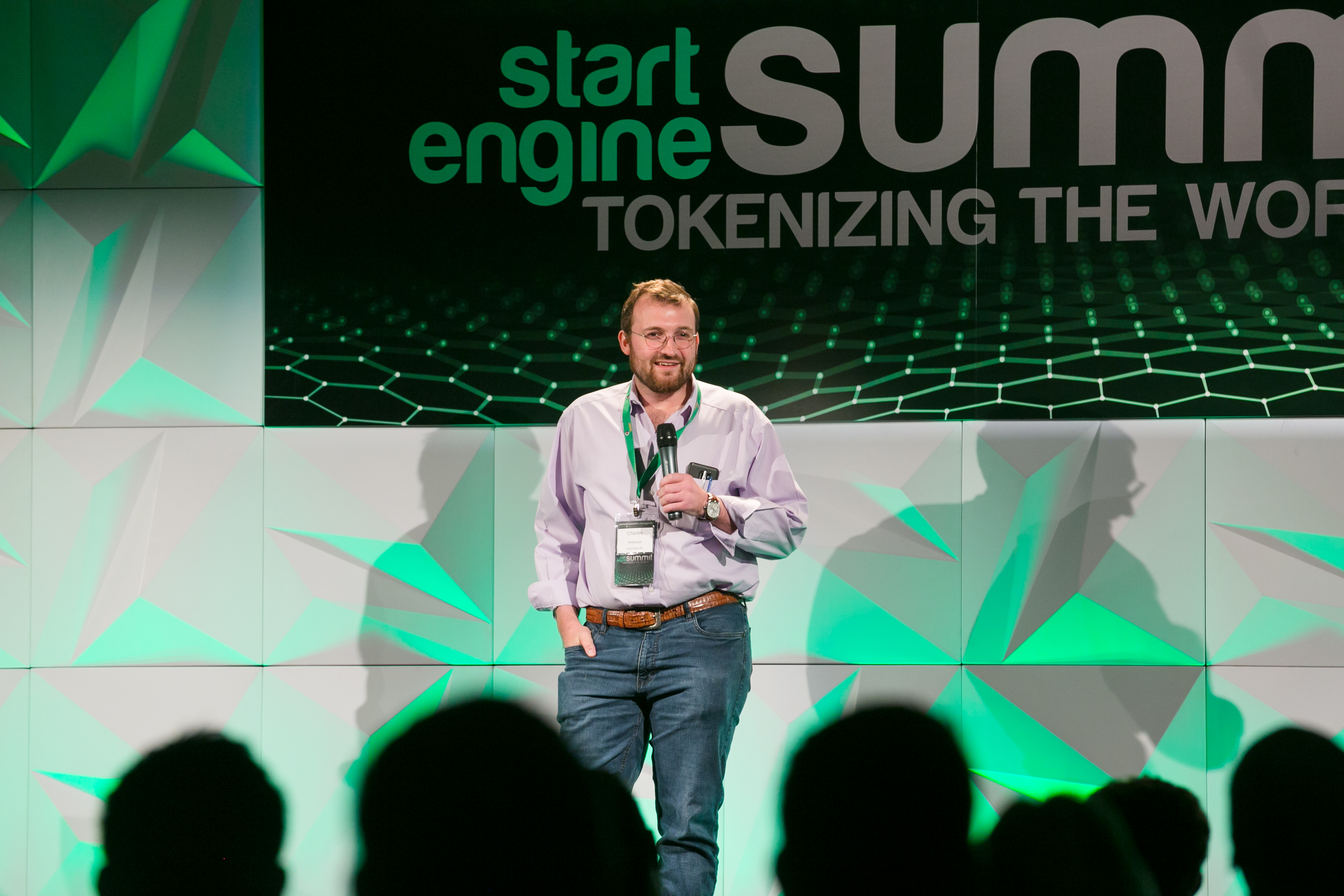 A Global Financial System with Hoskinson: “We Are Only as Good as the Tools We Have”

The doors opened, and attendees flooded back into the room to catch the closing keynote of the StartEngine Summit: Charles Hoskinson, founding member of Ethereum and founder of IOHK, which develops blockchain solutions that includes the third generation cryptocurrency Cardano.

Hoskinson has an unassuming presence, with one hand tucked into his pocket, dressed more like a dad that enjoys long walks in the mountains than one of the brightest minds in crypto. His speech is thoughtful and quiet, and his stories ramble with a gentle cadence that lulled the audience despite the condensed information packed into each anecdote. Hoskinson is a master orator.

He began with stories of travel. After all, Hoskinson has travelled to 27 countries this year, 50 in the last three. First, Hoskinson spoke of Addis Ababa, Ethiopia.

“Traffic was worse than LA,” Hoskinson began, as he describes a startup that was an Uber for vegetables. With very little capital, the company had become very profitable by connecting farmers and their produce directly to restaurants. They asked him to invest, and Hoskinson said sure, until it dawned on him: “How do I get liquidity? How do I sell my stock?”

The startup told him that there is no stock market in Ethiopia. There is a commodities exchange, but it is politicized and difficult to get through. “Game of Thrones is real,” Hoskinson said, “and is based on Ethiopia’s coffee markets.”

If you want to start a business and sell it as an Ethiopian entrepreneur, Hoskinson told the crowd, you have to do it outside the country.

Hoskinson then spoke of Mongolia, which has traffic worse than Ethiopia. 30% of the population is nomadic, and he described seeing camels on the side of the road. The population of Mongolia is 15x what its roads are built for, but revamping public transportation would cost $2B. Why can’t Mongolia source the capital? They don’t have good markets.

Hoskinson’s company IOHK works around the world with countries like Ethiopia and Mongolia. “They have common problems,” Hoskinson said. “They are excluded from the world’s financial system as it is. They would love to come and play, but it is simply too expensive on the compliance side. KYC and AML are horrendously expensive, especially when the lifetime value per customer is $20. They can’t play in global markets and tokenize these things despite the fact that trillions of dollars of value are locked up, whether it’s real estate, resources, SMEs that exist that have real balance sheets, cash flow, and customers.”

Hoskinson then traced back to his roots and his entrance into crypto in 2011. He describes the first Bitcoin meetup he signed up for. It had “two registrants, me and another guy. I showed up, and the other guy didn’t.”

At the time, Bitcoin, Hoskinson said, was “a cognitive experiment.” If hackers created code that is supposedly cryptographically protected, supposedly because most people aren’t smart enough to understand the underlying tech, would people use real money to buy a token?

In the early days, no one cared about the answer except for a few curious minds. The regulators certainly weren’t paying attention, but that began to change in 2013. “2013 was the year that everyone said this was a good idea. The markets went to $1B.” And so, Hoskinson told a rapt audience, we reached the first generation, defined by “the concept of decentralization and the mass delusion that this could be worth money.”

What this did, in Hoskinson’s opinion, was that it “woke people up to programmable money: that old business processes, issuing assets, trading assets, taking a contract and dissecting its actual intent and putting [that all] in code and automating as much as possible and putting that into a system that is timestamped, immutable, and auditable…it’s a pretty cool thing.”

In 2013, Hoskinson and a small team began building Ethereum, the second generation of cryptocurrencies, which launched in 2015. Eventually, people realized what Ethereum was: a “Rube Goldberg machine in the sky.” That’s when 2017 happened. Money poured into ERC-20 tokens on the scale of billions of dollars, and individuals found themselves with tens of millions of dollars.

“A 22 year old kid with no business experience or knowledge can wake up with $30M and not even a bank account, not even a legal registration…we are still recovering from this. 2018 was the ‘oh wait that’s probably not the best idea, let’s take it back but we can’t’ year.”

“Something Magical Will Happen”

In the aftermath of ICOs, governments are all going different directions. Some look to the EU and the US and what their regulators are saying about tokens. Other jurisdictions, such as Barbados, Bermuda, Malta, Gibraltar, and others, are being opportunistic, thinking to themselves “wouldn’t it be interesting if we could capture a chunk of this market?” On the other side, China and South Korea are more draconian in their approach to tokens.

“There is no consensus in the world,” Hoskinson said. “It makes it difficult for a guy like because at the end of the day I’m just trying to do stuff. I care a lot about how do I help people? How do I build things for consumers? How do I make this useful to them?”

Hoskinson then told an anecdote about Sandton, South Africa, in which he visited the townships that have 35% unemployment, a place where people live on less than $100 a month. He met with a venture that asked him to build a land registration system as there is currently a problem of residents not telling the government when they sell their land. They just trade the deed for cash. In order to find out who really owns a property, Hoskinson said you must use “the Grandma test,” in which you ask the oldest grandma in the neighborhood for a history of the property, and she’ll tell it to you in full, over four hours, probably with tea.

Getting back to regulation, Hoskinson acknowledged that there are problems and that if you are a US citizen issuing tokens, the US government will find a way to claim they have jurisdiction. “You can be selling to people in Tonga and have it in a bizarre Polynesian language,” Hoskinson joked, “but if you are a US citizen issuing it or bringing money back to the US, somehow someway a US regulatory body will say you owe taxes or should have filed some form. Mea culpa.”

ICOs are no exception, Hoskinson believes. Many will be yelled at. They will have to apologize, pay a fine of variable size, and do a Regulation A offering or some other exemption. In turn, this will cause the formation of regulated marketplaces, such as Coinbase and tZERO, that “will find ways to create liquidity for these instruments that weren’t regulated” but need to be now.

Then, Hoskinson suggests, “something magical will happen.” As things develop, people will begin to ask fundamental questions like, “why the h*** does it cost so much money to do compliance?”

Hoskinson argues that the high cost is due to the fact that we have tasked banks and institutions with “the duty of whether you are [financially] safe or not. It makes them conservative. It makes them biased.” You could be the Angolan Bill Gates, but because you live in Angola, which is a high risk jurisdiction, you can’t open a bank account.

Eventually people will ask to do things differently. For instance, Hoskinson poses the following hypothetical: “what if [compliance] was on a transactional basis – [individuals answer] a collection of questions for every transaction.” Those answers then query data warehouses to determine whether the trade is “safe” or “compliant.”

“Someday, someone will try it,” Hoskinson told the crowd. “It won’t be tried in the US. It will be tried in Africa” to facilitate a cross-border payment in countries without good systems for it. Somewhere, it will work, and when it works, more people will do it. “When enough people do it, it will change the world,” he said.

Laws are malleable and adapt to changing behavior. After all, as Hoskinson noted, until 1992, it was illegal to sell things on the Internet because people believed it would turn the internet into a “cesspool of spam and pornography.” They were right, Hoskinson joked, but we also got Amazon.

The Stumping of Coffee Trees

“I’m just a guy, and you’re all just people,” Hoskinson said as he transitioned to the final point of his keynote. Titles, money, and experience aren’t what gives individuals prominence in Hoskinson’s opinion.

In the past 25 years, Hoskinson thinks that the market we live in has changed in a profound way. Today, when you do business, you do business with the entire world, and our systems of regulation and compliance, the payment and financial systems are not designed to accommodate that.

As the power of the US dollar recedes, and other powers rise in the world, global economics will no longer be defined by US policy. There can be no mandates, Hoskinson believes. Instead, we will be forced to negotiate.

“You know what happens when you have to negotiate? Your culture changes. Your society changes…in the next 10-20 years, we will see great fortunes made, and we will see things change. One thing I am absolutely certain about is that we will settle on a completely new world financial system.”

Hoskinson believes that this new system will take expensive things and make them automated, including compliance. A lot of jobs will disappear. “We will start to see money move with the speed of information.”

Hoskinson ended his keynote by returning to Ethiopia’s coffee markets once more to describe the process of stumping. Stumping is a practice in which coffee growers chop down old trees for new growth. The old trees still have productive capacity, but the new trees will produce 2-3x more coffee. Yet farmers don’t stump their groves because they can’t afford to. It’s money out of the pocket now. It’s a problem that is solved, simply, by credit.

“When these new systems come into play, somewhere soon a farmer can ask someone in this room for a loan of $50 or $100 to stump their trees with 20-30% interest,” Hoskinson said. “That’s a reality that will come. We will see billions and hundreds of billions of dollars flowing all around the world to those who need it most with the rates and risks of that going down. It will change their lives. It will make the world a better place.”